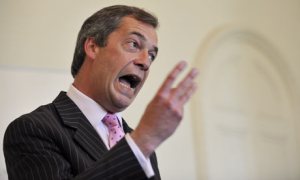 It would be quite remiss of me not to comment on Nigel Farage’s latest attempt to garner publicity in the run-up to the General Election.  In a pathetic and offensive attempt to get himself noticed, the  co-chair of the European Freedom and Democracy Group yesterday launched an unprecedented personal attack on the new President of the European Council, Herman Van Rompuy.

Mr Farage’s reference to President Van Rompuy as a “low grade bank clerk” with the “charisma of a damp rag”, was deeply insulting and unsurprisingly elicited loud protests from those listening in the European Parliament Chamber.  They were quite simply shocked by the outburst, as indeed was I.

Mr Farage didn’t just limit himself to insulting Mr Van Rompuy.  Later in his speech he turned his puerile attack on to the entirety of Belgium, referring to it as a “non-country”.

Mr. Farage, who stepped down as Leader of UKIP last year, has controversially broken with British political convention by running against Speaker John Bercow in the upcoming General Election.  Farage now needs to get people to vote for him, and it seems he will stop at nothing in this futile quest.

A lot of what Mr Farage does is, of course, an exercise in self-promotion, both for its own sake and more recently to further his Westminster ambitions.  After the announcement of President Van Rompuy and Cathy Ashton as President and High Representative, Mr Farage gave a scurrilous speech in the Chamber full of fatuous points and inaccurate statements; a man very much in love with the sound of his own voice.  On that occasion Jerzy Buzek, the usually placid and even-handed President of the European Parliament, felt the need to reprimand Farage for his outburst.

I was very interested to hear the coverage of yesterday’s incident on the Today Programme on BBC Radio 4 this morning.  The journalist Jonny Dymond stated that Mr Farage was aiming to get himself expelled from the parliament as a “martyr” for euroscepticism.  Apparently he believes that this will help in his fight against Speaker Bercow.  If this is true I am not the least bit surprised.  Mr Farage is not interested engaging in political discussions in a proper and reasoned manner.  He would much rather go for the headline grabbing, shock tactics, because they focus the attention more on him than on the debate.

I would urge my colleagues in the European Parliament not to rise to his bait.  Don’t expel him, don’t give him what he wants.  He should instead be treated like a naughty child who is acting out.  Just ignore him, he’s only doing it for attention.

My admiration goes to President Van Rompuy, whose response was succinct and dignified:  “There was one contribution that I can only hold in contempt, but I’m not going to comment further.”  Quite.