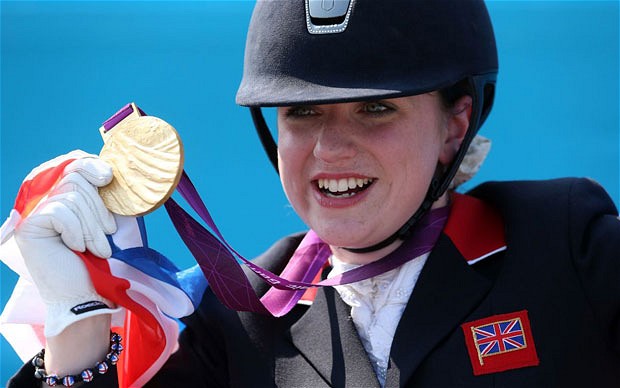 In her first ever Paralympics at the age of 22, Natasha Baker could not have asked for a better introduction to the equestrian events at this level.  She broke Paralympic records and took home Team GB’s first equestrian gold medal of the games.

Natasha has been inspired by watching now team-mate Lee Pearson and his horse at the Sydney games on television with her mother.  She contracted transverse myletis, an inflammation of the spine which affects nerve endings, when she was 14 months old leaving her with limited use of her legs. She started Riding For the Disabled classes as a therapy aged nine and was talent spotted aged 11.

She rides by using her seat and voice and she gave up using stirrups — upon which able- bodied riders are so reliant – after being unable to extricate her feet when unseated and being dragged a couple of times.

Going early in her class on her 11-year-old Polish-bred gelding Cabral, Natasha scored a Paralympic record mark of 76.857 per cent for the individual grade II championship test but she then had to watch on as two German riders came desperately close to that incredible score.

First Angelika Trabert, a rider with no legs but incredible balance, scored 76.000 per cent before the reigning Paralympic champion, Britta Napel, a rider who has had paralysis in her legs and torso since being poisoned by insecticide in 1998, came in determined not to let go without a fight. She scored marginally higher than her compatriot, 76.048 per cent, to take silver.

“It’s the most incredible feeling,” said Baker clasping her medal and wrapped in a Union Jack. “It’s my first games, it’s at home and to come back with a gold medal is amazing,” she said. “When I got on the podium and saw all the flags and people cheering it was just wow. It means everything. Since I was 10 I said I’d come to the Paralympics and win gold.”