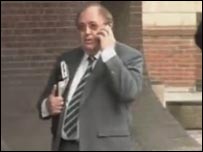 Ashley Mote at one of his many court appearances

An elected UK Independence Party MEP, who is a proven liar, has been up to his old tricks again this week. Thankfully the honest majority of MEPs were not going to let him get away with it.

In an e-mail circulated to all MEPs Ashley Mote declared that: “the EU is irredeemably corrupt and beyond salvation.”

Unfortunately for Mr. Mote it seems he is the corrupt one, having been convicted of £65,000 worth of benefit fraud. Even his own defence barrister said: “The shame is complete”. This was quickly pointed out to him in an open email response to him from a parliament worker.

But the dishonest Mr. Mote, not shamed by stealing from hardworking taxpayers, showed his incredible arrogance by attacking this as: “An attempt to get me silenced which has utterly failed. Now the subject of an appeal. No surprise that you forgot to mention it”.

It was left to Labour MEP Richard Corbett to finish Mr. Mote’s career by reminding the whole parliament of THIS BBC story saying he has lost his final appeal and has been ordered to repay the stolen money. Perhaps Ashley could let us know how much money he has repaid so far?

I will be pleased to see Ashley Mote lose his seat in the coming elections. Even UKIP with all their “colourful” men (no women at the top of their lists) have kicked him out. We should change the law so that any MP, MEP or other elected official going to prison for offences like these automatically loses their seat.