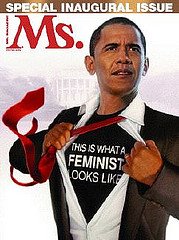 “I am a feminist” exclaimed the man pinned with the world’s hopes, Barack Obama, when he met two eminent experts on women’s rights last year.

One of these women, editor of America’s leading feminist magazine Ms. seems to have been convinced by this statement. The front cover of this month’s magazine has the President ripping off his inaugural day red tie and white shirt to reveal a t-shirt emblazoned with “This is what a feminist looks like”.

However, as the President sits down this week to an in-tray, of economic despair and two wars, will women’s issues be in the forefront of his mind?

Let’s hope so. In his first week, which incidentally shares the 36th anniversary of US women’s abortion rights, the President has pledged to rescind the Global Gag Rule that stops UN family planning programs receiving US federal funds. This rule has been the subject of political ping-pong for the past 25 years, initially put in by Reagan, rescinded by Clinton then reinstated by Bush. A telling example of how presidential powers set the lifelong agendas of women across the world.

Obama’s next planned move, in what is fast looking like a full set of political ping-pong, is to overturn the shameful decision, by the Supreme Court in Ledbetter v. Goodyear Tire Rubber, with a new Fair Pay Act. This will re-empower American women workers to sue for wage discrimination. In a country where parking attendants still make more than childcare workers, and there’s only one woman on the Supreme Court, this is some much needed equality legislation.

However, as we know from over 30 years of equality legislation in the UK and a widening pay gap, legislation can only go so far. American economist, Randy Albelda, points out in a recent article “The Macho Stimulus Plan” that in order to effect any real change government rhetoric must match the statute books. And so far, for all Obama’s oratory heights, in my opinion his triplets don’t look far enough past alliteration to make any great cause for feminisation. In Obama’s speech on stimulating the economy he spoke of “building roads, bridges and schools, developing eco friendly technologies”. But as these are construction based industries that are dominated by men (just 2.7 per cent of US construction workers are women) such fiscal stimulation is almost to the sole benefit of male workers. To rectify this Albelda proposes an additional stimulus plan for the female side of the economy: “caring for those who cannot care for themselves, healthcare and primary education are the very foundation of a civil society. Investing in these outcomes is as vital to our long-term economic health as airports, highways, wind turbines, and energy retrofitted buildings.” She points out that not only do these jobs disproportionately employ women, but “investments in direct care, education, and healthcare would also go a long way in alleviating poverty.”

Taking it a little closer to home let’s examine Obama the boss. How is the new president shaping up as a pro-female employer? Disappointingly, just five out of the 20 cabinet-level posts in his administration have gone to women. A number comparable to cabinets of the last previous presidents, which has earned the scorn of one journalist who claimed Obama’s feminist credentials as no more “impressive than any previous president”.

A measly one in four ratio in no way gives the voices of American women equal representation in the room where all the big decisions are being made. But it can be argued that Obama’s cabinet does not just have the responsibility of being representative in terms of gender, but also ethically, politically and in terms of people’s life experience.

According to the Fawcett Society ethnic minority women face double discrimination on the grounds of their gender and race. So Obama’s appointment of six black women as his closest aides and ambassadors pushes back barriers of discrimination beyond that of gender.

Nonetheless, rumbles of discontent amongst many women’s groups are already audible in the media. Co-founder of non-partisan women’s group New Agenda has accused the new president of taking “shocking steps backwards”.

The President’s choice of pastor Rick Warren to lead the invocation at his inauguration ceremony was also felt to be an affront by many liberal women’s groups who had previously backed Obama in his campaign. On this issue, I think people’s upset and confusion is justified. Choosing a pastor who preaches socially conservative views on abortion rights and gay marriage does not shout “I am a feminist” to me.

But President Obama got to his position and an approval rating of 80 percent, dramatically higher than either Clinton or Bush, not by making enemies but by finding common ground with people with whom he disagreed with on some issues. This is most certainly an outstanding skill to have as a diplomat and even as a politician, world leader and president. But will it will make for an outstanding feminist? We don’t have time to wait and see. Feminists of all political colours across the world need to put pressure on Obama to set about making concrete feminist policies and include the needs of women in all of his globally inspiring oratories. As one thing you can be sure of, is that pretty much every other interest group is doing that, right now.

Well, who could fail to be inspired. The hope (to use Obama’s own word) and excitement reminded me of May 2 1997. I was one of the many lining Whitehall that balmy summer’s morning cheering our new Prime Minister, Tony Blair, being completely carried away by the optimism he was bringing to Britain. It was, indeed, a glorious day, just as it was yesterday.

I have two dreams of my own:

Obama’s statement in his inaugural address that “We are a nation of Christians and Muslims, Jews and Hindus – and non-believers” bodes well for those of us who are humanists and secularists. While it may not be a massive move away from faith (and Obama is himself is a committed Christian), it did at least put down a marker that the 44th President may be moving away from the religiosity of the Bush years. I can only hope that freethinking, ie not possessing a religion, will again become acceptable in America. My dream will be well on the way if we see non-believer candidates for the 2012 presidential contest.

Obama has shown some willingness to carry forward the equalities agenda. Yet it is not enough for him to quote his personal experience as “a man whose father less than 60 years ago might not have been served at a local restaurant (who) can now stand before you to take a most sacred oath” and leave it at that. He must deliver on equalities. I was pleased to see three women among the 14 names so far announced for his Cabinet. Yet appointing Janet Napolitano, Susan Rice and Lisa Jackson is not enough. I want a complete change in attitude to abortion in America and equal pay across the United States, and that’s just for starters.