Last week’s Tribune kindly features me as their “star letter”. As it is not on their website here it is…. 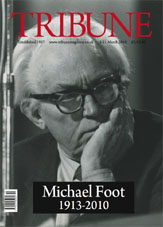 meron changed his mind on spending cuts for crime prevention and then over  children’s schools. The Tory leader had another debacle over tax breaks for married couples. Yet he appears to think it is sufficient to say: “Sorry we got it wrong, we’ll do better next time”. It would be wrong to let the Tories off the hook. As an aspiring Prime Minister, Cameron has a duty to do his sums properly and put forward workable policies on social spending.

But making a mess of domestic policy pronouncements is not his only problem. The party’s European policy – to repatriate powers from the European Union back to the United Kingdom – is not credible and cannot be delivered. No incoming government in any of the 27 EU countries has ever attempted to unpick treaties previously agreed by every member state. EU agreements, such as the recent Lisbon Treaty and the Maastricht Treaty that caused John Major so much grief, are negotiated down to the smallest detail by all EU governments.

Consensus is eventually reached. Once signed, EU treaties are finished and not something that can be played about with.

No one has been clearer on this than Pierre Lellouche, France’s Europe minister, who said: “nobody is going to indulge in rewriting for many years. Nobody is going to play with the institutions again. It’s going to be “take it or leave it” and they (the Conservatives) should be honest about that.”

Yet the Tories are happy to sell the British people something that is impossible. However, in a recent survey on the ConservativeHome website, 45 Tory candidates for the forthcoming general election listed repatriation of powers from Europe as their top priority.

Cameron’s cynical use of EU issues to boost his standing with his party’s grassroots – those people who want to bring back hanging and abolish the BBC – is despicable. The man and his party are not to be trusted.