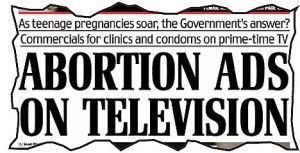 There seems to be only very short periods of time when abortion does not feature in the news in some way or other.  The “Daily Mail”, always hot on abortion stories, has come up with this one today reporting that the Committee on Advertising Practice and the Advertising Standards Authority has delayed a decision on whether to allow advertisements for abortion on television.  You can see the article here.

I believe very strongly that information on abortion services should be publicised as widely as possible, including, of course, on TV, radio, other broadcast media, as well as in print.  Women should never be denied the opportunity of making the most informed decision they can about their pregnancy.  Nor do I believe that adverts about abortion services will increase the number of under age pregnancies or sexual promiscuity.  We already live in a world where sex is on display in a number of ways in very many places – the internet, computer games,  music and, of course, television itself.  Since advertising pregnancy testing is legal, it seems only right and proper that details of contraception and abortion should be equally available.   Given that Britain has the highest rate of teenage pregnancy in Europe, I fail to see the logic in restricting access to ways in which this could be reduced.

Contrary to popular myth, I do not believe that any woman undertakes a termination lightly.  For most women it is a difficult and painful decision entered into because no other option is available.  It is also a procedure which is safer the earlier it is carried out – hence the need for speedy and accurate information of the services provided.  I hope the two regulatory bodies involved will take the courageous decision to advertise abortion on television and not give in to pressure from a few very organised groups who seek to return us to the dark ages.