The EU comissioner of Justice Viviane Reding was scathing in her rebuke in which she stated that European treaties had been set up to protect peoples personal data from being put at risk.

Ms Reding along with the French Data Protection Authorities pointed out that Google was in breach of the 1995 EU directive on data protection.

The French organisation has since written to Google.

Google insisted that it had consulted widely about the changes. Ms Reding said it was OK for the giant to use the data but it required informed consent from people first. ‘The choice is not with the company – the choice is with the people. It’s for the individual to judge.’

You can read an exclusive interview in the Guardian with Ms Reding here.

Meanwhile, the British PM’s growth plan which was sent to Brussels some weeks ago failed to be included in any of the proposals in a draft text compiled by Herman Van Rompuy.

In a further embarrassing twist for the British Prime Minister it was revealed that Van Rompuy did include proposals from France and Germany, almost word for word.

During a summit the British Prime Minister made a somewhat embarrassing complaint that his call for “clear targets, timetables setting out dates and accountability” had been snubbed. It’s hardly surprising that Cameron has been left in the cold; his less than positive approach so far has rendered him a joke among many.

If he’s serious about being part of the debate then his policies need to begin to reflect it. You can read Bruno Waterfields full report in last week’s Telegraph, here.

Respected newspaper European Voice covered the signing of the fiscal treaty here which both the Czech Republic and the UK abstained from signing.

European Voice also reported that Commissioner Reding is expected to announce she will legislate for the establishment of quotas for the number of women on company boards after only  24 companies signed up to Reding’s ‘Woman on the Board Pledge’ which aimed to increase the proportion of women on their boards.

You can read the full report here, and I will update you during the week on further announcements.

Child security and the distribution of child abuse images online is a very important issue.  You may remember me blogging about the use of internet blocking last year (read the blog here).  A very useful resource in finding out about this subject is a relatively new blog called Desiderata (Latin for ‘things you desire or need).

I should say that the blog is written by an old friend of mine, John Carr, who I have known for many years.  As well as an old friend though, he is a world expert in the field of child safety and security online, as an adviser to the British Government and the United Nations.  Further more, John is an executive on the European NGO Alliance for Child Safety Online and is Secretary of the UK’s Children’s Charities’ Coalition on Internet Safety (made up of NSPCC, Action for Children, Barnardo’s and many more). He has also provided advice for Microsoft, MySpace and Google as well as a number of the UK’s leading mobile phone service providers.  John was also the worthy recipient of an OBE for services to child security online.  So you can see he is well placed to offer advice and analysis on many of the problems that worry many parents and people responsible for young children and teenagers.

The blocking of internet sites that contain child pornography is one of the first issues that John tackles on his new blog.  If you would like to read a well written and thorough defence of blocking and a debunking of the arguments against then please click here, I highly recommend it.  He writes with clarity, never overly technical so even relative laymen like me can understand, and has a mastery over the subject matter, not surprising given his unparalleled level of expertise in this area.  Blocking was recently voted on in the Parliament’s Civil Liberties committee, and it did not go the way he or I would have hoped.  I was happy that most if not all UK MEPs were in favour blocking, but perhaps if a few more MEPs from other delegations, particularly Germany, had read John’s blog, we may have got a better result.

Apart from that I think we can expect a high level of discussion about all current issues and debates surrounding the important subject of child security online.  In his most recent posts John talks about the possibility of Internet Service Providers doing more to stop children accessing inappropriate material.  He suggests solutions that I think would definitely meet the approval of any parent or carer who reads it.  I’m sure we will see a lot more like this in the future. 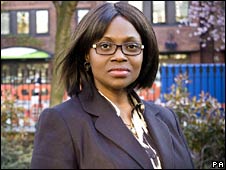 Lillian Ladele who discriminates against gay men and lesbians.

I wrote last year about the perverse decision favouring Lillian Ladele. This was the woman who thought she should be able to ignore the law of the land and refused to conduct Civil Partnership ceremonies. She probably wanted to pour green custard over them, but that’s another example of people unable to accept democratic decisions taking the law into their own hands. I see from this week’s Islington News that having had the original decision overturned (has anybody investigated the tribunal who came to this perverse decision?) that her latest appeal has failed. As Ms. Ladele is funded by the Christian Institute I expect this to go all the way up through the House of Lords and to the European Court of Human Rights wasting a lot of time and money that could be far more productively used. They have not recorded their defeats on their website.

I googled Lillian Ladele to research this piece and all the top hits are totally out of date.

I cannot find one national news organisation with the facts. Worse click on any of these above and you will think that Lillian Ladele has won her case. Google is a neutral tool so the responsibility lies with the broadcasters anbd the newspapers. All these sites are out of date. None have been updated (and the appeal was overturned in December) and they still give a distorted view of what happened. Of course they like a controversial story and find common sense boring. I think it is unlikely that appealing to these organisations good nature will get them to report more responsibly. What will I suspect is when someone defames or worse assaults somebody because of what they have found on the net.

I am against internet regulation but as a public organisation the BBC is failing massively by not reporting the facts. It is following the 24/7 “feral beast” trend that menas that despite massive improvements in life expectancy the NHS is still lazily bashed. It is not perfect but where are the stories about people living longer happier lives. It is a fact because actuaries have confirmed this:

“Over the last few years, the issue of longevity risk has gained prominence as mortality rates, and therefore life expectancies, have been improving at an accelerating and faster than anticipated pace.” The Actuary 1.5.08

A Labour government, an improved economy and NHS and people live longer. Conclusive to me but who makes this causal link in the media? No it’s a MMR scare here and an isolated example of bad treatement there.  A true picture is that by voting Labour the country has accelerated its increase in longevity. Vote Labour to Live Longer, it’s a fact! What a slogan!

I have leapt a bit here but the point is the same. We live longer and have more money. We are more tolerant and Lilllian is an outdated bigot.

Yet our media fails to report this and runs down things far more readily than praising them. They need to get how the web works and their responsibilities to their readers and viewers.